A friend in need is a friend indeed! 😇

A # A friend in need is a friend indeed

TO ERR IS HUMAN😇

TO FORGET IT AND STILL MAKE THE SAME 🙄

YOU BECOME A MASTER IN THE GAME 🏆

Some mistakes don't have a noteworthy impact,  but a few change the course of your life.I shall be talking about both, till u feel, thank God you are after all not me.

The first big mistake I remember was committed in my 4th standard,  I was 8 years old then and had made my very first best friend. 👭Her name was Kanchan. We had sworn to stand by each other through thick n thin . One day she informed me her telephone ☎️ ( that was the norm in the 80s and 90s ) was out of order and if I could register its complaint. I told her that I was unaware of the process. She gave me a number on which I was supposed to call and directed me on how to go about it . I agreed 👍.  In the afternoon,  I decided to do the needful.  I called up, a man's voice answered,  I told him I wanted to register a complaint about so n so number. The man asked me my name and my number. Initially, I felt unsure why is this required 🤔, it is not relevant, but my innocent mind, thinking it to be a prerequisite, obliged. 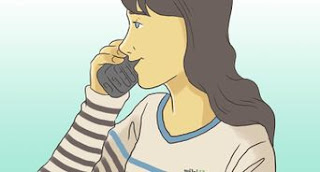 I diligently gave him a few more details he sought,  like I was in which class, which school etc. He said the complaint has been registered. I felt relieved and hung up.

In school, I told Kanchan, that I had been a great friend and done what she wanted. So all was well.

When I went home, around the same time, in the afternoon, my phone rang. I simply picked up. To my horror, it was the same man. He said he just wanted to talk to me   I started sweating in fear I requested him not to call me, I didn't need to register any more complaints. Saying so I banged the phone in a panic and fled. No sooner had I gone a little far, he called again. My Mom from the kitchen inquired whose call was it and why aren't was answering. I lied saying its some wrong number and trembling with fear I kept the receiver aside. I went back to finish my homework,  but couldn't concentrate,  I was literally feeling nauseous with anxiety and nervousness.  I didn't know what to do. I felt off I told my parents or my sisters, they will only blame me for being such an idiot.

Somehow the day and the troubled night passed. The next morning 🌄 I was running a high fever so had to miss school. I was continuously dreading the same hour in the afternoon, and the phone rang again, I frantically ran to pick it up. It was the same Man and this time I started crying on the phone, begging and pleading with him not to call me. MY MOM SAW THIS,  I dropped the receiver and ran into her arms,  hugging 🫂 her tight, telling her everything in between sobs. She patted me, went to the phone, took the receiver and gave that creepy man the Real LEFT, RIGHT AND CENTRE OF HIS LIFE.

I LOVED MY MOM SOOOO MUCH THAT DAY.

LESSON LEARNT # Never give your personal details to anyone randomly,  don't be such an IDIOTTT .

REPERCUSSIONS # I never spoke to Kanchan after that,  somehow I couldn't.

Disclaimer: I am participating in Blogging from A-Z challenge 2022 and this is my first post for A - A Friend in need is a friend indeed.

Popular posts from this blog

July 20, 2021
What is success? How do u identify a successful person 🤔,like u can just point and say "that man/ woman is a great achiever ." "Actually the definition keeps changing from year to year /month to month /day to day,infact moment to moment . As a youngster u start with a small goal ,getting good grades in your academics or winning an interschool match ,achieving that ,is Success for you then,u r beaming with happiness, smiling ear to ear ,but what after that, once u get into your next class or in the next league, the previous accomplishment is forgotten as the new target starts staring at you .Once u grow up it's still the same, slight change in the objective,which is to start a business venture which starts seeing success from day 1 or a taking up a well-remunerative job, although it still can't be said emphatically that u have finally arrived and u shall remain ahead of the game for the rest of your life. Every day u keep trying harder and harder to remain in th
Read more

Compliments are needed by all 🌹

July 22, 2021
Hey Mirror "Do u think I look Pretty" ?How important is it to look stunning? Yes, I agree; it's your first impression of a stranger. But somehow, it's getting seriously significant. You need to look well groomed when going to meet someone for the first time.   Presently it seems really really crucial to look your best, be it in reality or in a photograph. The need to look perfect is outshining all the efforts required to be put in.   Although the latter is way easier and pocket-friendly, just a little editing and adding a few filters can make a dull picture perfect. The person concerned an apple of everyone's jealous 😀eyes.  "Jassi Jaise koi nahi "started this phenomenon called "Makeover", and everything spelt metamorphosis after that.  The craziness is sweeping old and young. You walked into a makeover clinic and walked out transformed, till you washed your hair and face the next day.  But the pressure to look perfectly presentable at all tim
Read more

April 25, 2022
Disclaimer:  I am participating in  Blogging from A-Z challenge 2022  and this is my post for U # UNPREDICTABILITY OF LIFE #UNPRECEDENTED AND UNEXPECTED OUTCOMES 😏😏 LIFE being unpredictable is the most predictable notion  But even foreseeable things can sometimes add to your confusion 😕  When u have prepared just too well for an exam 😃😃 Days and Nights all u did was cram 🧐 You are just overconfident you will score the best 💯💯 You are ready for everything that comes in the test 💪💪 You try to answer every question diligently in the paper 🙂 Finally, when the results come you are just an average scorer🙄 😳😳😳😳😳  When you go for an interview you have everything rolled up on your sleeve🙋‍♀️  But your answers strangely tend to become the Interviewer's pet-peeve👤 When you actually want to show your intelligence 💪👌 You simply end up displaying your ignorance 😒  😒😒😒😒😒 Even in your personal life when you feel, a friend is closest to you 🫂 You are blessed to have an
Read more